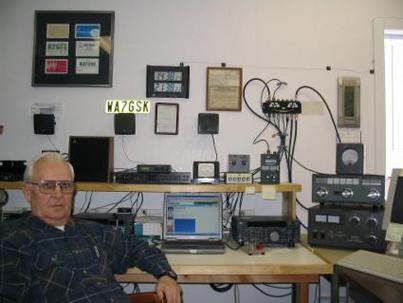 I was first licensed in Michigan as KN8GGT in 1957. I upgraded to K8GGT as a general licensee a year later. After college I took a job in Mamaroneck, New York as a field engineer for The Technical Material Corp. At that time I was their only solid state field engineer, but was also trained and worked on FRT-39 and FRT-40, 10 Kw and 40 Kw transmitters, and DDR-5 receivers. In New York I held the WB2NJX call sign.

I later transfered to TMC research in Tempe, Arizona where I got my current call of WA7GSK. In 1968 I accepted a job in engineering at Motorola Government Electronics in Scottsdale, Arizona. There I worked on the development of VHF and UHF radios and systems.

In 1981 I purchased a Motorola Two-Way radio sales and service shop in Boise, Idaho. Although I still am a 50% owner in the business, I have a partner who runs the day to day business, and I am mostly retired.

I am active on 80 through 10 meters HF, mostly cw. I am also active on VHF and UHF weak signal modes of operation(tropo, aurora, sporadic E, EME and meteor scatter).

I also like to restore old tube equipment that I use on AM. Especially 10 AM when the band is open. On HF my primary radio is a Kenwood TS-850s with a Kenwood TL-922A amplifier. The antennas are a Cushcraft A3 tri-bander and Carolina Windom on the lower bands.

I have recently updated my website for a new look and added DMR tab.